Exposure to antibiotic therapies during the first 11 months of life may have dose-dependent relationships with longitudinal nasal airway microbiota patterns in the first 2 years of life, with the use of broad-spectrum antibiotics having the largest effect, according to the results of a population-based birth cohort study conducted in Finland published in Clinical Infectious Diseases.

Investigators sought to explore the hypothesis that exposure to systemic antibiotics during infancy contributes to the development of childhood asthma via longitudinal changes in the nasal airway microbiota. The population-based birth-cohort study, called the Steps to the Healthy Development and Well-Being of Children (STEPS Study), evaluated families of Finnish children born in the Hospital District of Southwest Finland from January 2008 through April 2010. Study enrollment began during pregnancy or soon after birth.

Longitudinal nasal microbiota profiles were identified in children aged 2 to 24 months via the use of 16S rRNA gene sequencing and an unsupervised machine learning approach. The researchers performed a causal mediation analysis to assess the natural direct effect of systemic antibiotic therapies in infants aged 0 to 11 months of age on the risk of developing physician-diagnosed asthma by aged 7 years. They also studied the natural indirect (ie, causal mediation) effect by examining longitudinal changes in the nasal microbiota of the participants.

A total of 697 children were included in the analysis, from whom 1923 nasal swabs were obtained. In this analytical cohort, medical records and electronic prescription data were available for 99% of the participants. Overall, 8.0% (56 of 697) of the children developed asthma by aged 7 years. The prescribing of inhaled corticosteroids was documented in 93% of patients with asthma.

A total of 52% of the infants aged 0 to 11 months received systemic antibiotic treatment (median, 1 antibiotic per child). Of the antibiotics that were prescribed, 39% were classified as broad-spectrum antibiotics. The antibiotics most often prescribed, in descending order, included amoxicillin (33%), amoxicillin-clavulanate (15%), penicillin G (10%), gentamicin (9%), and azithromycin (8%). Of note, compared with children who received 0 to 1 antibiotics, those who received ≥2 antibiotics were significantly more likely to have household siblings and acute respiratory tract infections (P <.001 for both).

Furthermore, the exposure to ≥2 antibiotic therapies in infants aged 0 to 11 months was associated with a 4.0% increase in the absolute risk for the development of asthma (95% CI, 0.9%-7.2%; P =.006). Those infants who had received a higher number of antibiotic treatments exhibited a significantly higher risk of having a profile with early Moraxella sparsity (per each antibiotic therapy; adjusted relative rate ratio, 1.38; 95% CI, 1.15-1.66; P <.001). This effect of antibiotics on asthma was partially mediated by longitudinal changes in the nasal microbiota (natural indirect effect, P =.008).

A major limitation of the current study is the fact that the researchers analyzed upper airway microbiota, and asthma involves the lower airways.

The investigators concluded that these results should facilitate additional research into the complex interplay among antibiotic exposure, microbiota, and host response, as well as provide new opportunities for the prevention of childhood asthma. 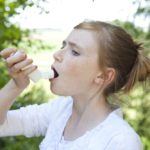