High counts of blood eosinophils combined with increased fractional exhaled nitric oxide (FeNO) may serve as biomarkers for a risk for exacerbations in patients with severe asthma, according to study results published in the Journal of Allergy and Clinical Immunology: In Practice.

A total of 465 adult patients (median patient age, 54 years; range, 17-83 years; 66.5% women) from 84 sites in 13 countries with severe asthma were enrolled. Participants were receiving daily inhaled corticosteroids (fluticasone propionate ≥500 µg or equivalent) and ≥1 second controller medication. Biomarker, clinical, and safety data were collected from all of the participants over 52 weeks.

The median time since a diagnosis of asthma was 19.4 years. In the prior year, 42.4% of patients had experienced ≥1 asthma exacerbation. At baseline, 52.0% of patients were periostin-high and 48.0% of participants were periostin-low. Overall, 87.5% of participants had type 2 inflammation (ie, blood eosinophils ≥150 cells/µL and/or FeNO ≥25 ppb, and/or positive skin allergen test).

Biomarker levels were found to correlate poorly with each other. Central and local laboratory blood eosinophil and immunoglobulin E measurements, however, were generally in agreement. There was no significant difference reported in asthma exacerbation rates over 52 weeks between periostin-high and periostin-low subgroups (rate ratio, 0.93; 95% CI, 0.67 to 1.28; P =.642). Higher exacerbation rates were observed in participants with blood eosinophils ≥300 cells/µL and FeNO ≥25 ppb.

”[T]here were no clinically meaningful differences in the exacerbation rates between periostin-high and periostin-low subpopulations of patients with severe asthma in this study. Key Type 2 biomarkers, including periostin, blood eosinophils, serum IgE, and FeNO, were not highly correlated with each other,” concluded the study authors. “[P]ost hoc exploratory analyses suggested a potential clinically relevant predictive and prognostic ability for asthma exacerbation of blood eosinophils and FeNO when used in combination.” 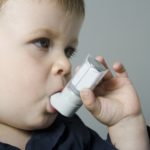