The case studies include children aged 8 to 18 years with clinician-diagnosed persistent asthma and ≥2 exacerbations in the previous 12 months. Each participant underwent training to use a commercial FOT device (tremoFlo, Thorasys Ltd, Canada) for daily FOT measurements (4 months, 60-s measurements in triplicate, 5-37 Hz signal).

The day-to-day variability of respiratory system resistance and reactance at 5 Hz was reported as coefficient of variability calculated over the previous 7 days. The researchers defined end of exacerbations as the first day in a series of 7 consecutive symptom- and asthma reliever-free days.

The results of patient 1 show the differing patterns of change in FOT during asthma exacerbations. During the first acute exacerbation, the patient used reliever medication and maintained FOT indices within normal variability. During the second acute exacerbation, the patient had more positive respiratory system resistance, more negative reactance, and increased day-to-day variability. There was then a gradual return to previous baseline values.

“As a tidal breathing technique that is highly feasible in children, FOT may provide a valuable and sensitive objective monitoring tool currently lacking in this setting,” the researchers wrote. 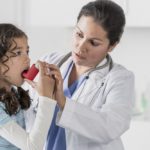