Maternal smoking during pregnancy increases the risk for adult-onset asthma in offspring, according to a study published in the European Respiratory Journal.

The study was an analysis of questionnaire and clinical data of 5200 participants in the Northern Finland Birth Cohort 1966 Study who were free of physician-diagnosed asthma by 31 years of age. Only participants who had complete information on their mothers’ smoking status during the last 3 months of pregnancy and information on asthma incidence at 31 years and 46 years were included.

Limitations of this study include the lack of objective markers for smoking during pregnancy and the lack of adjustment for maternal smoking exposure after birth and throughout childhood.

“These results could reflect early vulnerability of offspring´s airways to environmental tobacco smoke exposure and its putative long-term effects,” noted the study authors. 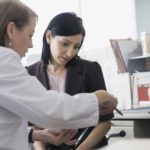 Should Asthma Care Shift Away From Control and Severity Steps?