Levels of prostaglandin D2 (PG-D2) may be helpful for differentiating asthma and chronic obstructive pulmonary disease (COPD) from asthma-COPD overlap syndrome (ACOS), a study in the Journal of Asthma reports.

Researchers from the University of Health Sciences, Istanbul, Turkey, obtained blood samples from stable patients with asthma (n=27), COPD (n=35), and ACOS (n=24) who attended 2 centers in the city. Patients included in the study were receiving inhaled steroids and long-acting bronchodilator combination treatment. Blood samples were analyzed, and levels of cysteinyl leukotrienes, PG-D2, prostaglandin E2, interleukin 5, and a disintegrin and metalloprotease domain (ADAM33) were measured. To differentiate between asthma and COPD, the researchers assessed differences between groups and their associations with pulmonary function tests.

Limitations of the study include the small number of patients, as well as the inclusion of patients from a single geographic area in Turkey.

The study investigators also propose that PG D2 blood levels “may be a sign of systemic inflammation in ACOS.” 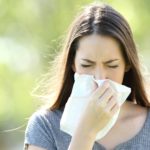 Allergy Immunotherapy May Slow Progression of Asthma Severity in Adolescents