A recent report in the Mediterranean Journal of Hematology and Infectious Diseases detailed 3 cases of patients with sickle cell disease (SCD) who had severe vaso-occlusive crisis (VOC) soon after receiving vaccination with the ChAdOx1 nCov-19 vaccine.

The report was authored by Salam Alkindi, BA, MB, BCh, BAO, MSc, PRCP, of the Department of Hematology at the College of Medicine & Health Sciences at Sultan Qaboos University in Muscat, Oman, and colleagues.

Since the coronavirus 2019 pandemic has begun, multiple vaccines have been developed against the SARS-CoV-2 virus. “Although these vaccines are generally safe, their widespread use worldwide has produced reports of unusual complications,” the authors wrote in their report.

The patients described in the report all had S/B0 thalassemia and had been stable prior to vaccination. They developed fever and tachycardia. Laboratory findings also showed elevated white blood cell counts and liver enzymes, especially alkaline phosphatase, with substantial decreases in hemoglobin and platelets. One patient developed a fatal condition described as being a thrombotic thrombocytopenia-like syndrome.

Patients included a 29-year-old male who developed pain in the shoulder and back 6 days following receipt of the ChAdOx1 nCov-19 vaccine. The patient had not been admitted during the 21 months prior to vaccination. During hospitalization, the patient experienced a fever and laboratory findings showed elevated liver enzymes and C-reactive protein (CRP). Pain management was initiated, in addition to intravenous antibiotics, and the patient recovered.

The second patient was a 34-year-old male who was admitted after pain in his lower back, chest, and shoulder developed during the first 5 days after receiving the ChAdOx1 nCov-19 vaccine. He had not been admitted during the prior 39 months. The patient had anemia, thrombocytopenia, and hyponatremia, and CRP, bilirubin, and other liver enzymes were found in high quantities. The patient had right-side infiltrates visible on chest X-ray. He was given blood transfusions and antibiotics and recovered.

The third patient was a 28-year-old male who developed severe back pain and presented to a hospital 3 days after receipt of the ChAdOx1 nCov-19 vaccine, for which he was given analgesia. This patient had not had an admission during the prior 6 months. At the hospital, patient had tachycardia, tachypnea, and 93% oxygen saturation, for which he was given supplemental oxygen. His hemoglobin and platelet levels were dropping, while D-dimers, CRP, and liver enzymes were elevated, and he had a pulmonary embolism. He received low molecular weight heparin and transfusions but developed bradycardia and hypotension. Thrombolysis was performed, but the patient’s condition worsened, and he died at 3 days following hospitalization.

“In light of these findings, we have asked our patients to exercise caution when taking this type of vaccine,” the authors wrote. 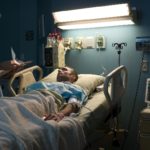 Statin Use Not Linked to COVID-19 Mortality in Hospitalized Patients