Cardiac arrest accounts for substantial morbidity and mortality. It is characterized by unexpected circulatory collapse related to a cardiac cause, most commonly cardiac arrhythmias. Despite advances in the care of patients with cardiovascular disease, survival rates for patients who experience cardiac arrest are dismal; for those who do survive, neurological sequelae are common and often devastating. In the United States alone, >300,000 deaths each year are attributable to out-of-hospital cardiac arrest.In many cases, patients with cardiac arrest have underlying/preexisting coronary artery disease. A large number of patients will have underlying structural heart disease, including ischemic and non-ischemic cardiomyopathy, infiltrative disorders, and valvular heart disease. A smaller percentage of patients will have genetic or acquired abnormalities in cardiac conduction, increasing their risk for arrhythmias and sudden death; these include the Brugada syndrome, long and short QT syndromes, hypertrophic cardiomyopathy, and medication-induced torsades.

The key to early management is prompt resuscitation. For patients with ventricular arrhythmias, early defibrillation is paramount. Other resuscitative efforts, including cardiopulmonary resuscitation and the application of advanced cardiac life support (ACLS), are necessary to achieve a perfusing cardiac rhythm.

There are no specific criteria for diagnosis of cardiac arrest. In most cases, death is unexpected and occurs within a short time (usually within 1 hour of symptom onset). In the absence of a palpable/perfusing pulse, resuscitative efforts should begin. An external automated defibrillator should be applied to all cardiac arrest patients to confirm underlying cardiac rhythm. For patients with a “shockable rhythm” (e.g., VT or VF), defibrillation should be employed.

Following effective resuscitation, a series of diagnostic studies are usually obtained. This includes a 12-lead ECG to assess for evidence of ACS, in particular looking for ST-segment elevation, which should prompt consideration of emergent coronary revascularization. It should be noted, however, that many patients will have ST-segment and T-wave changes following cardiac arrest in the presence or absence of significant epicardial coronary disease.

Other diagnostic studies often include a screening/non-contrast head CT to evaluate for intracranial hemorrhage or cerebrovascular accident and serum chemistries to rule out electrolyte disturbances that may have triggered arrhythmia. Other laboratory studies, imaging tests, and diagnostic procedures may be necessary depending upon the presentation and examination findings.

How do I know this is what the patient had?

If the patient had sudden loss of consciousness and no palpable pulse, it can be assumed that he or she had a cardiac arrest.

While in its classical sense cardiac arrest is due to unexpected death from a cardiac cause, other disease states can result in rather sudden circulatory collapse. Consideration must be given to other etiologies, including acute pulmonary embolism, vasodilatory shock, hypoglycemia, severe neurological insult (i.e. hemorrhage, stroke), etc.

Once hemodynamic stabilization has been achieved, a number of diagnostic studies could be considered depending upon the characteristics of the patient and the presentation.

– Mild therapeutic hypothermia as indicated – based upon institutional protocol; the application of hypothermia deserves special attention here. This therapeutic modality results in a decrease in metabolic demands of all organ systems, particularly the brain. In addition, hypothermia decreases toxic reperfusion pathways, activates adaptive protective mechanisms, and decreases intracranial pressure. In two pivotal trials in which patients with out-of-hospital cardiac arrest were randomized to hypothermia versus standard care, there was a demonstrable improvement in neurological recovery and, in one trial, a significant improvement in mortality. As a result, the International Liaison Committee on Resuscitation (ILCOR) recommends that therapeutic hypothermia be used in all unconscious adult patients with spontaneous circulation after out-of-hospital cardiac arrest when the initial rhythm is VT or VF. In addition, ILCOR notes that cooling may be beneficial for other rhythm disturbances and for in-hospital arrest victims.

Despite improvement in our therapies for patients with cardiovascular disease, survival and favorable neurological outcomes in patients with cardiac arrest remain poor. There is a growing body of evidence supporting the early application of mild therapeutic hypothermia for survivors of cardiac arrest, resulting in demonstrable improvements in neurological function and, in some cases, survival. Nonetheless, many survivors of cardiac arrest will require long-term care and will have prolonged convalescence.

Patients will often require substantial long-term care in the form of skilled nursing, physical and occupational therapy. If a primary arrhythmia was the cause of arrest, many patients will require implantation of an implantable cardioverter-defibrillator (ICD) and will need outpatient cardiology follow-up. For those with neurological sequelae of their arrest, particularly in the form of seizure activity, neurology follow-up is recommended.

The pathogenesis of cardiac arrest is often poorly understood, and cardiac arrest is commonly multifactorial in etiology. It has been postulated that often multiple dynamic factors interact to produce a substrate susceptible to arrhythmia development.

In many cases, obstructive coronary disease with resulting ischemia/infarction can precipitate cardiac arrest; in other cases, disorganized/dysregulated myocardial tissue and scar formation can precipitate life-threatening arrhythmias – these include nonischemic cardiomyopathies and hypertrophic cardiomyopathies, to name a few. In still other instances, genetic and acquired conduction disturbances can result in arrhythmogenesis.

The majority of patients with cardiac arrest have underlying structural coronary arterial abnormalities; while this most commonly refers to obstructive coronary artery disease, congenital abnormalities in coronary blood flow can result in cardiac arrest. Dilated and hypertrophic cardiomyopathies account for another high-risk patient population, due to the underlying risk of re-entrant ventricular arrhythmias. Finally, other cardiac disorders, including valvular heart disease, congenital heart diseases, infiltrative disorders, and both primary and acquired electrophysiological disorders can all result in fatal arrhythmias and cardiac arrest.

Of all the patients who suffer out-of-hospital cardiac arrest, the majority do not survive. In fact, most patients fail to make it to the hospital. For those who do reach the hospital, less than 1 in 10 survive to hospital discharge, and the majority of those do so with significant neurological deficits. With the application of novel therapies, including induced hypothermia, however, epidemiologic trends suggest that survival is improving and functional recovery parallels these mortality gains. 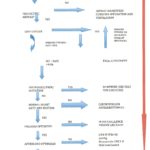