Mixed connective tissue disease (MCTD) is a systemic autoimmune inflammatory disorder characterized by high titer U1-RNP antibodies, and clinical and serological overlap of systemic lupus erythematosus (SLE), systemic sclerosis (SScl), and polymyositis. Since the original description of MCTD in 1972 by Sharp et al, its existence as a discrete rheumatologic diagnosis has been rigorously debated.

Critics of the concept of MCTD as a disease entity argue that many patients initially diagnosed with MCTD later meet criteria for SLE or SSc, that autoantibodies cannot define a diagnosis, and that patients diagnosed with MCTD are not a homogeneous population with similar prognoses and response to therapeutics. Supporters of the concept of MCTD as a distinct diagnosis recognize that these same problems hold true for other autoimmune diagnoses such as SLE and Sjögren’s syndrome.

There are four published criteria for the diagnoses of MCTD. Most authors use the Alarcon-Segovia criteria because of its simplicity, and high sensitivity and specificity (90% and 98% respectively). The criteria require high titer U1-RNP antibodies (defined as greater than 1:1600 with hemagglutination), and three of five additional signs: hand edema, synovitis, myositis, Raynaud’s phenomenon, and acrosclerosis.

It has been argued that the presence of anti-Smith (Sm) or anti-double stranded DNA (dsDNA) antibodies should serve as exclusion criteria. The patient should also not meet criteria for other autoimmune disorders. As in most autoimmune diseases, the pattern of involvement may change over time, resulting in a different diagnosis. Up to 75% of patients initially diagnosed with MCTD will meet criteria for SLE or SSc with prolonged follow-up.

Trigeminal neuralgia has been described as a rare presenting symptom of MCTD. There are also rare reports of patients with MCTD presenting with photo-distributed papulosquamous eruptions consistent with subacute cutaneous lupus erythematosus, cutaneous small vessel vasculitis, and livedoid vasculopathy.

The diagnosis of an autoimmune disease is based on groups of signs, symptoms, and serologies (Table I). To discern MCTD from SLE, polymyositis, and SSc, a full autoimmune review of symptoms should be completed.

Because MCTD is an overlap syndrome, there are no characteristic findings on physical examination. The vast majority of patients will present with a non-erosive arthritis of the joints in the hand and Raynaud’s phenomenon. Approximately two-thirds will present with hand swelling. Sclerodactyly is often seen as well. There are rare reports of patients with MCTD presenting with photodistributed papulosquamous eruptions consistent with subacute cutaneous lupus erythematosus, cutaneous small vessel vasculitis, and livedoid vasculopathy.

As mentioned previously, the Alarcon-Segovia criteria can be used as a fairly accurate diagnostic tool. The criteria require high titer U1-RNP antibodies (defined as greater than 1:1600 with hemagglutination), and three of five additional signs: hand edema, synovitis, myositis, Raynaud’s phenomenon, and acrosclerosis. Patients who meet criteria for SSc or SLE are given these diagnoses instead. Presence of anti-Sm, anti-dsDNA, anti-Scl-70, and anti-centromere antibodies should steer one to reconsider the diagnosis of MCTD, as should renal or central nervous system involvement other than trigeminal neuralgia.

MCTD is a very rare systemic autoimmune disorder with an estimated prevalence of 10/100,000 people. Women are at nine times the risk of the disease as men. In contrast to SLE, there appears to be an equal prevalence between whites and blacks. Patients with HLA-DR4 and DR1 appear to be at higher risk of MCTD.

The etiology of MCTD is unknown. Genetic predisposition likely plays a role, reflected in the associated increased risk with HLA subtypes DR4 and DR1.

By definition, all patients with MCTD have high titer autoantibodies to U1-RNP, an RNA particle that splices mRNA. It is postulated that these autoantibodies play a role in disease etiology, but this has yet to be confirmed. These autoantibodies are thought to form by a breakdown of self-tolerance during the clearance of apoptotic cells. These apoptotic cells form surface blebs filled with intranuclear material that is ultimately recognized as foreign.

Others have postulated that these autoantibodies are formed via molecular mimicry of common viruses, such as the Epstein-Barr Virus (EBV). Anti-U1-RNP antibodies are thought to cause vascular damage via upregulation of adhesion molecules targeting cytotoxic cells, or activation of the complement cascade Patients with MCTD also produce anti-endothelial cell antibodies and antiphospholipid antibodies that may further contribute to vascular damage.

Patients with MCTD are at high risk of interstitial lung disease (ILD) and isolated pulmonary artery hypertension (PAH) and should be screened with yearly transthoracic echocardiograms (TTE) and pulmonary function tests (PFTs) with diffusion capacity (DLCO). A low DLCO should prompt further evaluation for ILD with a high resolution CT scan. If the high resolution CT scan does not show evidence of lung fibrosis, a right heart catheterization for more careful evaluation for PAH may be warranted.

Regular monitoring for cytopenias via complete blood counts, myositis via creatinine kinase and aldolase, and proteinuria via urinalysis is also recommended.

Most patients with mild MCTD can be managed with NSAIDs for their arthralgias and arthritis and cold avoidance for their Raynaud’s phenomenon. Some patients report diminished fatigue and joint aches with hydroxychloroquine. Hydroxychloroquine should be dosed at 6.5mg/kd/day of ideal body weight.

Patients should be counseled of the risk of cutaneous blue-grey pigmentation, and retinopathy. Patients should have a baseline visual field exam within the first three months of hydroxycholorquine therapy, and every six months thereafter. Hydroxychloroquine is usually not effective until taken concurrently for two to 3 months. Patients with Raynaud’s phenomenon should be counseled on cold avoidance, clothing layering, and smoking cessation.

Patients with severe Raynaud’s phenomenon may benefit from calcium channel blockers such as nifedipine and felodipine, or cGMP phosphodiesterase inhibitors such as sildenafil. Nifedipine can be started at 30mg by mouth daily and slowly titrated up every 2 weeks until Raynaud’s phenomenon is improved, or side effects occur. Felodipine has a higher specificity for peripheral vasculature, and therefore is a good option as well. Felodipine can be started at 2.5mg by mouth twice daily. Sildenafil, a cGMP phosphodiesterase inhibitor, has provided patients some relief at a dose of 50mg by mouth three times a day. Patients should be counseled on the risk of hypotension with either of these classes of medications.

Patients with Raynaud’s phenomenon may also benefit from serotonin re-uptake inhibitors (SSRIs). SSRIs deplete platelet serotonin and therefore inhibit aggregation. I usually add flouxetine at a dose of 20mg by mouth daily to a vasodilating medication. Patients should be counseled on the risk of hypotension with either of these medications.

Patients with myositis should have a baseline bone density evaluation, such as a DEXA scan, and should be started on prophylactic calcium, vitamin D and bisphosphonates at the initiation of steroid therapy. Women of childbearing age should be counseled on the unknown side effects of bisphosphonates on the developing fetus. Steroid-resistant myositis is often treated with the addition of alternative immunosuppressants such as methotrexate or mycophenolate mofetil.

Patients who develop signs of systemic vasculitis, renal involvement, ILD, and/or PAH should be referred to the appropriate medical sub-specialties.

Patients with MCTD should be monitored for signs and symptoms that would qualify them for diagnoses of SLE, SSc, or polymyositis. Semiannual and symptom-directed monitoring for cytopenias via complete blood counts, myositis via creatinine kinase and aldolase, and proteinuria via urinalysis is recommended. Yearly monitoring for the formation of anti-Sm, anti-dsDNA, anti-Scl-70, and anti-centromere antibodies can also be considered.

The patient and their family should be counseled that autoimmune inflammatory diseases are diagnosed based on pattern recognition. Early in the disease process it is possible that key signs and symptoms of the ultimate diagnosis may be missing, and therefore continued monitoring must occur.

The diagnoses of MCTD is, in itself, often a clinical conundrum. Making a diagnosis of MTCD requires careful assessment of the patient’s history, review of systems, physical examination, and serologies. Exclusion of SLE, SSc, and polymyositis can be difficult. Patients must also be re-examined at regular intervals, lest new signs or symptoms emerge that change their clinical pattern and thus their diagnosis. 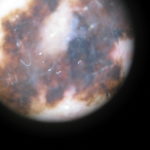