Neurothekeomas (NTKs) are rare tumors of uncertain origin. The true incidence is difficult to determine due to the confusing terminology that has been used. Most are benign, but local recurrence has been documented. Despite the name, there is no evidence of an origin from peripheral nerve sheath

They affect both genders and almost any age, but are most common in 2nd decade (median age 17 years) and have a predilection for females. Favored sites are the head (particularly nose, cheeks, orbital region), upper extremities, and shoulder girdle. A firm, solitary, slow-growing dome-shaped nodule in skin and / or superficial subcutis is the common presentation.

Biopsy demonstrates a dermal and / or subcutaneous tumor composed of nodules of spindled cells arranged in whorls or fasicles (Figure 1). Tumors range from densely cellular with a collagenous stroma to sparsely cellular with abundant myxoid stroma (leading to confusion with other tumors and the creation of subtypes designated cellular, mixed, and myxoid). Scattered multinucleated giant cells are a common feature. Mitotic activity and cytologic atypia may be marked in a subset of cases. Tumor cells typically express vimentin, NKI/C3, CD10, smooth muscle actin, factor 13a, PGP 9.5, and micropthalmia transcription factor (MITF); they are negative for S100, Melan-A, and GFAP.

Peak incidence in females in the second decade (but almost any age may be affected and the tumor is not uncommon in males).

The etiology of neurothekeoma is unknown.

No clear association with systemic or genetic conditions has been documented.

Complete excision is the preferred treatment; wider excision (1 cm) may be prudent in cases with atypical features (higher mitotic rate and cellular atypia), since the biological behavior of NTKs with atypia has not been fully characterized and since “neurothekeoma” may represent a spectrum of neoplasms with varying biological behavior.

The optimal therapy is complete excision.

Periodic follow-up for possible recurrence is the recommended management; 6 months for initial follow-up is suggested; longer intervals are probably sufficient if there is no evidence of recurrence after 1 year.

In a proportion of cases, mitotic activity and cytologic atypia may be pronounced (leading some pathologists to classify atypical neurothekeomas as malignant fibrous histiocytomas (MFH) or “undifferentiated sarcoma”; however, the superficial and localized nature of true neurothekeomas are not features of an MFH or sarcoma. The significance of atypical features is unknown since these tumors are so rare and since diagnosis may be difficult; metastasis has not been documented, but tumors on the face appear to have a tendency to recur

Hornick, JL, Fletcher, CD. “Cellular neurothekeoma: detailed characterization in a series of 133 cases”. Am J Surg Pathol. vol. 31. Mar 2007. pp. 329-40. (This large case series demonstrated the predominance of the lesions for the head and neck and proximal extremities and the low tendency for recurrence (except for lesions on the face). The authors suggest that there was no convincing evidence that atypical features suggested a more aggressive course.) 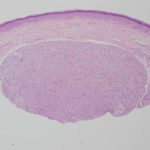