Rickettsialpox is an acute, self-limited febrile illness that belongs to the spotted fever group of rickettsioses caused by the bacteria Rickettsia akari. It was first identified by Dr. Robert Huebner in New York City in 1946. Although relatively benign, rickettsialpox can easily be mistaken for many more serious disorders with devastating complications and different implications.

Rickettsialpox occurs by transmission of R. akari from infected house mouse mite bites. The colorless tiny mites inflict a painless bite that goes unrecognized by the human victim. The incubation period can range from 24 hours to several weeks.

Rickettsialpox initially presents with a painless, erythematous, indurated papule or nodule ranging in size from 0.5-3.0cm at the site of the mite bite. In a few days, the lesion begins to vesiculate with a surrounding rim of erythema, ultimately desiccating and leaving an ulceration that forms an eschar to produce the characteristic ‘tache noire’ (Figure 1).

Multiple eschars may be present, albeit rare. Self-resolution of the primarily lesion may take up to a month, however approximately one week after its presentation, high fever, chills, sore throat, rigor, diaphoresis, myalgias (usually involving the back muscles), anorexia, and photophobia can occur. Headache and stiff-neck may also be present and quite severe.

Nausea with or without vomiting, vertigo, conjunctival injection, and respiratory symptoms may also be less commonly present. Tender regional lymphadenopathy near the initial bite is common; however, generalized lymphadenopathy may also occur. If left untreated, the fever and systemic symptoms typically last about a week, however lethargy and headache may persist for an additional 2 weeks.

Approximately 2-3 days after the onset of constitutional symptoms a generalized papulovesicular rash ensues, reminiscent of varicella, that typically lasts a week. There is no typical sequence of spread. Although classically the erythematous papules are surmounted with an opaque vesicle, the lesions may remain avesicular or macular.

Approximately 20-40 lesions are common; however, the range may be from less than 5 to over 100 lesions. There may be involvement of the palms and soles, as well oral mucosa and pharynx. The lesions are typically asymptomatic; however, they may be pruritic and generally heal with post-inflammatory dyspigmentation without scarring. In contrast, the initial ‘tache noir’ may heal with scarring.

Laboratory abnormalities may include thrombocytopenia during the acute febrile illness, mild leukopenia, and a relative lymphocytosis.

Histologically, the primary lesions are characterized by extensive epidermal and dermal necrosis, as well as focal necrosis of the subcutaneous tissue. A lymphohistiocytic perivascular and periadnexal infiltrate may accompany endothelial cell swelling, thrombosed upper dermal vessels, and deeper vasculitis. Neutrophils may be seen in the necrotic tissue.

Early secondary lesions demonstrate necrotic keratinocytes and basal cell vacuolar alteration with superficial dermal edema. Later lesions reveal a subepidermal split and perivascular lymphohistiocytic infiltrate that can become vasculitic. In contrast to the other rickettsioses, the perivascular macrophage, not the endothelial cell, appears to be the targeted cell.

Indirect fluorescent antibody assay and complement fixation techniques are used to measure convalescent antibodies to R. akari, or if not available, Rickettsia rickettsii. A 4-fold increase, or more than 1:64 dilution of IgG, is considered to be diagnostic. Antibodies are generally detected approximately 10 days after the onset of systemic symptoms and peak at 3-4 weeks in untreated patients, or 6-8 weeks in patients receiving therapy.

Direct immunofluorescence (DIF) on biopsy of the eschar with anti-R. rickettsii antibodies is highly sensitive; however, only mildly specific due to cross-reactivity with other spotted fever group rickettsiae. Confirmatory cross-adsorption testing may be considered with R. rickettsii and R. akari. DIF is not very sensitive on secondary lesions so primary eschar biopsy is ideal. If immunohistochemistry is inconclusive, PCR from biopsy specimen can be obtained.

Rickettsialpox may be mistaken for a large variety of other entities, and one must consider other infections and inflammatory disorders, as well as thrombotic/embolic entities. The most important distinction is from cutaneous anthrax, as this could implicate a suspected bioterrorist attack given that rickettsialpox is generally seen in metropolitan areas where anthrax is less commonly encountered.

Other bacterial infections can also mimic the primary eschar of rickettsialpox, including ecthyma caused by Streptococcus or Staphylococcus, ecthyma gangrenosum typically caused by Pseudomonas aeruginosa, glanders caused by Burkholderia mallei, and tularemia caused by Francisella tularensis. Fungal infections in immunocompromised patients, including aspergillosis, fusariosis, and mucormycosis, can present with eschars.

Travel history may be helpful in distinguishing the etiology because scrub typhus is usually seen in Asia, African tick bite fever in Sub-Saharan Africa and the Caribbean, and Mediterranean spotted fever in Northeast Africa, the Middle East, and Southern Europe.

These exanthems have more a papular and/or petechial component and African tick bite fever usually presents with multiple eschars. The palms and soles are typically involved in Mediterranean spotted fever in contrast to rickettsialpox. A newer spotted fever organism Rickettsia parkeri may also cause a similar eruption in the United States. Fortunately, all of these organisms are sensitive to doxycycline.

The papulovesicular stage is strikingly similar to both varicella and smallpox, or variola major virus. They can be differentiated by the lack of an initial eschar in varicella and smallpox. Lesions of varicella tend to occur in crops accompanying a fever with an absent or mild prodrome, whereas the lesions of smallpox progress at the same rate after a prodrome of high fever and severe myalgias.

Rickettsialpox lesions are typically asymptomatic, whereas varicella is commonly pruritic and smallpox may be acutely painful or pruritic. Varicella tends to begin on the trunk and spread centrifugally with palms, soles and oral mucosa variably involved. Smallpox typically begins in the oral mucosa, face and extremities (including palms), spreading centripetally. Rickettsialpox can begin anywhere with no classic distribution of spread; however, it typically spares the palms and soles. Scarring is most typical with smallpox.

Gonococcemia can present with acral pustules or disseminated vesicular lesions but mainly on the extremities, sparing the trunk, face, palms and soles. Other viral exanthems, such as enteroviral infections, can mimic varicelliform eruptions.

Rickettsialpox has no sexual predilection and has been reported in patients as young as six months of age to 72 years old. It primarily occurs in large metropolitan areas where people live closer together and are more likely to come into contact with rodents carrying infected mites.

There may be an increased incidence in intravenous drug users. It has mostly been reported in the northeastern and midwestern United States, with approximately half of the cases reported in New York City alone. There have been sporadic cases in several other states as well as internationally. In the United States, rickettsialpox is reportable in DE, MA, OH, OR, PA, and TX.

Rickettsialpox is caused by the gram-negative bacteria R. akari. R. akari is an obligate intracellular coccobacillus that is transmitted to humans through bites of the infected house mouse mites, Liponyssoides sanguineus. These mites are colorless and are found on rodents, (mostly commonly the common house mouse, or Mus musculus) which serve as the reservoir.

When other rodents are scarce, L. sanguineus will bite humans leading to transmission of the bacteria causing rickettsialpox. Mite infestation is maintained through transovarial transmission of R. akari.

Rickettsialpox is a self-limited disease, classically without systemic complications. There have been case reports of self-resolving hepatitis occurring with rickettsialpox infections of unknown etiology. There have been no fatalities reported from infection with R. akari. Constitutional symptoms resolve in approximately 7-10 days in untreated patients, and usually within 48 hours in treated patients.

Rickettsialpox is a self-limited disease; however, treatment with antibiotics will shorten the duration of systemic symptoms from approximately 7-10 days without treatment to less than 48 hours with therapy.

The treatment of choice is doxycycline 100 mg orally twice daily for 2-5 days (or 48 hours after defervescence) along with supportive therapy with antipyretics. Pediatric dosing for children eight years or older is 2.2 mg/kg daily orally, divided twice daily, for 2-5 days, not exceeding 200 mg daily. Tetracyclines are contraindicated for non-fatal illnesses in children under eight, pregnancy and during lactation due to risk of permanent tooth discoloration.

As with other spotted fever rickettsioses, chloramphenicol may be considered but is not recommended due to its potential toxicity in a self-limited disease.

If the patient does not defervesce in 48 hours, alternate diagnoses should be entertained. Once the patient has clinically improved, there is no need for follow-up.

Patients and close contacts should be educated about the mode of transmission for rickettsialpox. Although commercial pesticides may kill the house mouse mite carrying R. akari, the most effective way to eliminate rickettsialpox infection is to eliminate the rodent reservoirs. This can be done by sealing up entry points, cleaning up cluttered areas used as nesting grounds, and removing all possible food sources.

There are also commercially available mousetraps or professional services to remove rodents from the home. Infection with R. akari does not protect against infections from other spotted fever rickettsioses.

Primary eschars are usually still present at the time of presentation; however, they may have begun to involute by the time the patient seeks medical care. Although not classic, there may be several eschars present in the same patient from multiple mite bites. Unlike many other insect bites, mite bites can occur on covered areas of the body, making the diagnosis difficult.

There is no human-to-human transmission so patients are not considered to be contagious. As stated previously, children under the age of eight and gravid and lactating females are not advised to use tetracyclines due to the self-limited nature of the disease and risk of permanent tooth discoloration.

Madison, G, Kim-Schluger, L, Braverman, S, Nicholson, WL, Wormser, GP. “Hepatitis in association with rickettsialpox”. Vector Borne Zoonotic Dis. vol. 8. 2008. pp. 111-5. (This is a case report of self-resolving hepatitis during rickettsialpox infection; however, it is unclear if the hepatitis is specifically due to the infection.)

Krusell, A, Comer, JA, Sexton, DJ. “Rickettsialpox in North Carolina: a case report”. Emerg Infect Dis. vol. 8. 2002. pp. 727-8. (A case report of rickettsialpox in an unusual location in the United States. This highlights the need for physicians to be aware of this entity even if practicing in historically unaffected areas.) 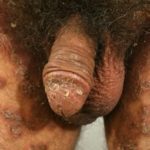