HealthDay News — Firefighters who were on active duty on Sept. 11, 2001 (9/11) may be able to reduce their risk for World Trade Center-Lung Injury (WTC-LI), according to a study published online Sept. 2 in the American Journal of Respiratory and Critical Care Medicine.

Noting that metabolic syndrome (MetSyn) increases the risk for WTC-LI, Sophia Kwon, D.O., M.P.H., from New York University in New York City, and colleagues modeled the association of longitudinal MetSyn characteristics with WTC-lung disease among 5,738 firefighters who were on active duty on 9/11. The effect of concurrent MetSyn on longitudinal lung function was examined, with the primary outcome of WTC-LI or non-WTC-LI (1,475 and 4,263 participants, respectively).

The researchers found that WTC-LI cases were more often ever-smokers, arrived the morning of 9/11, and had MetSyn. The factors that contributed most to concurrent loss of forced expiratory volume in one second (FEV1)percent predicted and forced vital capacity (FVC)percent predicted while conserving FEV1/FVC were body mass index ≥30 kg/m2 and high-density lipoprotein cholesterol <40 mg/dL. In susceptible populations, reduction of MetSyn factors further reduced the likelihood of WTC-LI.

“The lessons from our investigation can be applied not only to firefighters but to the millions of city dwellers exposed to air pollution on a daily basis,” a coauthor said in a statement. “They should be aware that while their environment poses real health risks, they may still minimize their risk of lung disease even if they cannot change their exposure.” 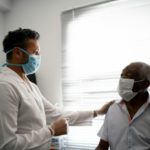