A significant positive association was reported between SARS-CoV-2 infection and venous thromboembolism (VTE) in patients with inflammatory bowel disease (IBD), according to a study published in Gastroenterology.

Researchers used an established Veterans Affairs cohort for this case-crossover study of patients with IBD and VTE. A total of 428 patients diagnosed with IBD before March 1, 2020 who also underwent an incident VTE event between April 1, 2020 and March 30, 2021 were identified.

Over the course of the study period, 58 SARS-CoV-2 infections were identified. Of these, 21 occurred within 30 days prior to a VTE event. SARS-CoV-2 infection was associated with 8.15-fold increased odds of VTE (95% CI, 4.34-15.30; P <.001), after adjusting for recent hospitalization and steroid exposure.

This study was limited by its retrospective nature. Furthermore, investigators noted additional thrombotic episodes may have occurred outside the Veterans Affairs system and thus not been included in analysis.

According to researchers, “Our data suggest that IBD patients who contract SARS-CoV-2 have a substantially increased risk of VTE and may therefore benefit from prophylaxis.” 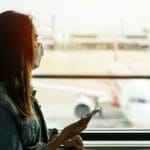 Canada to Mandate COVID-19 Vaccines for All Plane, Train Travelers