The definition of bronchopulmonary dysplasia (BPD) that best predicts early childhood morbidity categorizes disease severity according to the mode of respiratory support administered at 36 weeks’ postmenstrual age, according to multicenter study results published in the American Journal of Respiratory and Critical Care Medicine.

BPD is among the most common and severe complications of preterm birth, affecting more than half of extremely preterm infants. Despite improvements in neonatal care during the last 30 years, BPD rates have not declined. One barrier to reducing BPD rates is the inability of existing diagnostic criteria to reliably establish disease presence and severity.

Thus, researchers assessed 2677 infants born <32 weeks of gestation between 2011 and 2015, 683 (26%) of whom died or developed serious respiratory morbidity, and found that the diagnostic criteria that best predicted this outcome defined BPD according to treatment with the following support at 36 weeks’ postmenstrual age, regardless of prior or current oxygen therapy: no BPD, no support (n=773); grade 1, nasal cannula ≤2 L/min (n=1038); grade 2, nasal cannula >2 L/min or noninvasive positive airway pressure (n=617); and grade 3, invasive mechanical ventilation (n=249).

These criteria correctly predicted death or serious respiratory morbidity in 81% of infants, and rates of this outcome increased stepwise from 10% among infants without BPD to 77% among those with grade 3 disease. In addition, a similar gradient (33%-79%) was observed for death or neurodevelopmental impairment.

The researchers concluded that, “Although future studies should further assess the validity of these new diagnostic criteria, our results provide a strong rationale for using the definition described in this analysis as the modern, severity-based criteria for BPD.” 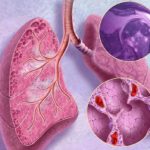 Sarcoidosis on Associated With Higher Mortality vs COPD, IPF on Transplant List