SEATTLE — Pediatric patients receiving epinephrine before arriving at urgent care or an emergency department did not present with epinephrine-related symptoms, in spite of many of these patients receiving higher than recommended doses for their weight, according to research presented at the Annual Scientific Meeting of the American College of Allergy, Asthma, and Immunology, held on November 15th through the 19th in Seattle, Washington.

Prehospital epinephrine often exceeds the recommended dose of 0.01 mg/kg for pediatric patients weighing <15 kg. The current retrospective cohort study described the presentation and dosing of 227 pediatric patients weighing <15 kg who were treated for anaphylaxis prior to arrival (PAE+) or after arrival (PAE-) at the urgent care or emergency department of a children’s hospital between July 2015 and April 2018. Patient median age was 1.78 years in the PAE+ group and 1.48 years in the PAE- group.

Patients given PAE+ received more epinephrine overall compared with those who did not receive PAE- (mean, 0.0197 mg/kg vs mean, 0.012 mg/kg). Vomiting after being given the initial epinephrine dose was linked to PAE+ (P <.05). At the time of their initial presentation at the treatment center, there were no differences in epinephrine-related symptoms such as pallor, tremor, or delayed capillary refill between PAE+ and PAE- patients.

Study investigators concluded that “[p]atients who received PAE do not present to [emergency department] or [urgent care] with epinephrine-related symptoms despite many receiving doses exceeding recommendations. Patients weighing <15 kg appear to tolerate intramuscular-epinephrine doses higher than 0.01 mg/kg, which supports the use of 0.15 mg epinephrine auto-injectors in this population when lower-dose auto-injectors are unavailable.” 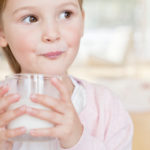 Almost 2% of Children Have Milk Allergy