Treatment with omalizumab for up to 1 year was associated with continued improvements in symptoms of chronic rhinosinusitis with nasal polyps, according to study results presented at the American College of Allergy, Asthma, & Immunology (ACCAI) Annual Scientific Meeting, held virtually from November 13 to 15.

According to the study investigators, there is currently a significant unmet need for effective long-term management of chronic rhinosinusitis with nasal polyps. Omalizumab, a humanized monoclonal antibody that binds to free immunoglobulin E, may address this unmet treatment need, according to results from previous clinical trials.

Participants who withdrew from omalizumab therapy had gradual worsening of their NPS, NCS, and SNOT-22 scores. These scores, however, remained below pretreatment levels at week 76. The investigators noted that the safety profile of the omalizumab in the open-label extension trial “was similar to previous reports.” 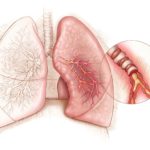 FeNO as a Predictor of Response to Dupilumab in Uncontrolled Asthma