Using hyperpolarized xenon-129 transfer contrast magnetic resonance imaging (129XeMRI) pre- and post-endobronchial valve (EBV) placement may yield a more comprehensive understanding of the lung’s response to this intervention than traditional imaging modalities, given that 129XeMRI simultaneously shows ventilation and gas exchange in the same lung lobe. This was among study findings presented at the American Thoracic Society (ATS) 2022 International Conference, held in San Francisco, California, May 13 to 18.

Successful EBV placement results in full lobar atelectasis that reduces hyperinflation and improves breathing mechanics. However, many patients for whom this intervention appears successful on the basis of forced air expiratory volume in the first second of expiration (FEV1) and residual volume measurements do not report better breathing or quality of life. Investigators sought to determine whether the129XeMRI could provide detailed information on ventilation and perfusion distribution and gas exchange pre- and post-EBV placement to identify characteristics of successful vs unsuccessful EBV placements.

Toward that end, investigators conducted a small study that assessed pre- and post-EBV placement lung function in 3 patients via 129XeMRI. For 2 of the patients, the investigators found that imaging markers showed ipsilateral lobe improvement. Breathing and quality of life also improved for these 2 patients,  indicated by FEV1 increases of 14% and 29%, respectively and a 20% reduction in St. George Respiratory Questionnaire (SGRQ) scores. Results of 129XeMRI for the third patient showed FEV1 increased from 0.59 to 0.77 L and improved ventilation in the ipsilateral lobe. No substantial changes were seen in gas exchange or quality of life, as this patient’s SGRQ score decreased by only 3%.

The investigators concluded that “Simultaneously imaging ventilation and gas exchange in the same lobe pre- and post-EBV placement may produce a more comprehensive picture of the lung’s response to this intervention, potentially helping to develop new strategies to expand the population of eligible [patients].” 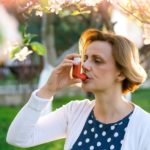 How Does Omalizumab Affect Antitussive Use in Patients With Allergic Asthma?