To investigate the efficacy and safety of the pleuromutilin antibiotic lefamulin (LEF)  in patients with community-acquired bacterial pneumonia (CABP) who have or may be at risk for severe pneumonia, researchers analyzed pooled data from LEAP 1 and 2 clinical trials comparing LEF and moxifloxacin (MOX), analyzing the data based on the presence of unilobar vs multilobar infiltrates. Findings of this research were presented at the CHEST 2021 Annual Meeting, held virtually October 17 to 20.

The phase 3 LEAP 1 and 2 noninferiority trials (ClinicalTrials.gov Identifiers: NCT02559310 and NCT02813694, respectively) demonstrated a high level of efficacy for LEF in the treatment of adult patients with unilobar or multilobar pneumonia — a level comparable to that of moxifloxacin (MOX). The trials also showed both LEF and MOX had similar treatment-emergent adverse event (TEAE) profiles.  In LEAP 1, patients with CABP (Pneumonia Outcomes Research Team [PORT] risk class III to V; ≥25% required to have a PORT risk class of IV to V) received intravenous (IV) LEF 150 mg every 12 hours (q12h) for 5 to 7 days or MOX 400 mg every 24 hours (q24h) for 7 days, with an optional IV-to-oral switch available. In the LEAP 2 trial, patients with CABP (PORT risk class II to IV; ≥50% required to have a PORT risk class of III to IV) received oral LEF 600 mg q12h for 5 days  or MOX 400 mg q24h for 7 days.

In the current study, which focused specifically on patients with CABP who had or were at risk for severe pneumonia, investigators analyzed the microbiological intent-to-treat population (ie, all randomized patients with at least 1 CABP-causing baseline pathogen) looking at 1) early clinical response (ECR) at 96±24 hours after first study drug dose and 2) investigator assessment of clinical response (IACR) at test of cure (TOC; 5–10 days after last dose). TEAEs were also assessed.

The researchers concluded that LEF is an alternative option to fluoroquinolones for the treatment of CABP in patients with multilobar pneumonia who either have or may be at risk for the development of severe pneumonia. 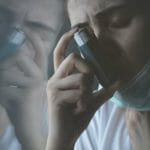 Real-World Efficacy of Biologics For Patients With Severe, Uncontrolled Asthma