Nathan and colleagues performed a post-hoc analysis to compare lung function changes from use of iTre in a study that involved patients with PH-ILD (INCREASE, n=326) and a study that involved patients with PAH (TRIUMPH, n=235). Baseline characteristics varied between the studies in that INCREASE patients were older and had a shorter mean 6-minute walk distance, the median percent predicted forced vital capacity (FVC) in INCREASE and TRIUMPH were 60% and 82%, and the percent predicted forced exhalation volume in one second (FEV1) were 63% and 76%, respectively. The investigators found that at Week 8 and 16 in the INCREASE study, percent predicted FVC increased by 0.8% and 1.1% in the iTre group and decreased by 1.0% and 0.7% in the placebo arm, while there was no significant treatment difference for week 12 FVC in the TRIUMPH study (1.1%, P=.40). The percent predicted FEV1 decreased in both studies, but treatment differences were not significant.

The investigators suggested that the significant improvements observed in % predicted FVC in PH-ILD patients and not in PAH patients may be attributed to mechanistic improvements in lung disease rather than improved pulmonary hypertension, which may provide evidence of treprostinil’s antifibrotic effects.

“The results of this post-hoc analysis suggest that PFT response to iTre in the INCREASE study may not be solely due to improved vascular compliance,” the investigators concluded. They added, “Prospective studies in patients with ILD are needed to investigate the antifibrotic effects of inhaled treprostinil.” 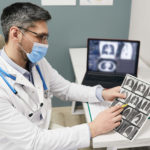