Antihistamine treatment prior to peanut allergy oral immunotherapy (OIT) slightly lowered the frequency of dermatological and gastrointestinal moderate to severe adverse reactions but did not reduce the risk for severe and overall adverse events. These were among study findings recently published in the Journal of Allergy and Clinical Immunology: In Practice.

Current OIT treatment regimens have side effects, and research on how to alleviate them is lacking. Antihistamine premedication is a standard method for preventing adverse events, but the practice has not been proven for food allergies in randomized controlled trials (RCTs). The authors of this study sought to determine whether premedication with desloratadine (an H1 antihistamine) and ranitidine (an H2 antihistamine) would lead to improved results with fewer side effects in OIT for peanut allergy.

This RCT (ClinicalTrials.gov Identifier: NCT01601522) was led by researchers in Hamilton, Ontario, Canada, who enrolled 43 pediatric patients between the ages of 5 and 10 years with peanut allergy. Patients were assigned randomly to receive peanut OIT with H1 and H2 antihistamines (desloratadine 2.5 mg in 5 ml orally once daily and ranitidine 75 mg in 5ml orally twice daily; N=17), peanut OIT with placebo antihistamines (N=16), or double placebo (N=10), consisting of placebo OIT with placebo antihistamines.

Study researchers brought children into the hospital and gave them a food challenge vehicle in the form of chocolate pudding containing peanut flour. Doses were increased until a reaction occurred. Patients then went home, where they continued to ingest the same peanut protein dose level daily along with the assigned premedication (ie, antihistamine or placebo).

Study researchers monitored patients every 2 weeks, bringing them back into the hospital and administering an increased level of peanut protein along with the participant’s assigned premedication. If participants experienced adverse reactions, the peanut protein level was decreased to the point of toleration before increases were again attempted.  After the dosage reached 500 mg of peanut protein once daily, participants continued at that level for 12 months.

The study also found that moderate or severe adverse events were lowered in the cohort given antihistamine premedication with OIT compared with the group receiving OIT without premedication (1.9 vs 4.2 events per patient; IRR, 0.46).

“Peanut OIT with or without antihistamines induced similar degrees of desensitization. Despite this, changes in quality of life, both improvements and worsening, were similar whether patients were treated with peanut OIT or placebo OIT and regardless of antihistamines co-treatment,” the authors wrote. Moreover, they noted, “Antihistamines premedication increased neuropsychiatric adverse events, primarily fatigue and dizziness.”

The researchers concluded that further RCTs are needed to identify safer approaches to food allergy treatment that improve quality of life for patients and their families. 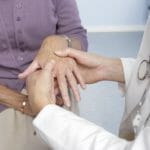 Most Common Allergies Not Linked to Rheumatoid Arthritis