A recently published report discusses the case of a 34-year-old male patient with a long history of eosinophilic esophagitis (EoE) that greatly improved after 3 months of therapy with tofacitinib, a Janus kinase (JAK) inhibitor.

The patient, who was diagnosed with EoE at 25 years old, also had a history of several other allergic conditions (ie, pollen food syndrome, asthma, chronic sinusitis, urticarial disorder) as well as rheumatoid arthritis (RA). Additionally, it was noted that he was allergic to multiple types of food and medications (ie, sulfa drugs, eggs, fish, raw vegetables and fruits, pork, wheat).

The patient’s initial endoscopy revealed ringed esophagus, longitudinal furrows, and white plaques, which were noted to be typical esophageal mucosal changes for patients with EoE. “Biopsy showed squamous mucosa with marked basal cell hyperplasia, increased intraepithelial eosinophils up to 50 per high power field (HPF) and superficial distribution of the eosinophils,” the authors stated. Laboratory findings revealed the patient had moderate eosinophilia and elevated levels of IgE and interleukin beta 174.

Several treatments were attempted but failed to manage the patient’s conditions, including proton pump inhibitors, topical steroids, a restricted diet, and infliximab (3 doses) for arthritis. The patient was also initiated on methotrexate, however, the development of a severe skin rash led to its immediate discontinuation. Additionally, only minimal response was observed after 2 years of treatment with canakinumab, which was originally initiated due to the concern of a systemic inflammatory response. Courses of azathioprine and tacrolimus were trialed, however, side effects of these medications eventually led to their discontinuation.

The patient was then enrolled in the RECEPTOS clinical trial, which evaluated RPC4046, a monoclonal antibody against IL-13. The patient reported a moderate improvement in his gastrointestinal and allergic symptoms, however, experienced no improvement in his joint pain and the trial only lasted 1 year. After the trial concluded, tofacitinib 5mg twice daily (with no avoidance of foods) was initiated to control the patients RA. After 3 months of therapy, a significant improvement in gastrointestinal and joint pain symptoms was observed and an upper endoscopy revealed a normal appearance of his esophagus.

“We present a case of a 34-year-old man with long-term diagnosis of eosinophilic esophagitis (EoE) who did not achieve control of disease after multiple therapies including topical and systemic steroids, immune modulators and biologics,” the authors concluded. They added, “Tofacitinib should be considered for the treatment of eosinophilic esophagitis given its evolving role as an immunosuppressive agent.” 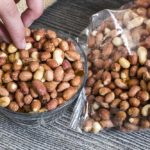 Individuals With Peanut Allergy May Not Need to Avoid Tree Nuts