In young children with persistent asthmatic symptoms, tiotropium 2.5 µg or 5 µg was considered safe and may have the potential to reduce the risk for exacerbations but not symptoms, according to a study published in the Lancet Respiratory Medicine.

The primary outcomes were safety and efficacy, as measured by the change in weekly mean combined daytime asthma symptom score from baseline to week 12.

Between July 26, 2012, and December 4, 2014, 102 children were randomly assigned to 1 of the 3 treatment groups — once-daily tiotropium 2.5 µg or 5 µg or placebo as add-on therapy to inhaled corticosteroids. A total of 101 children completed the study and were included in the analysis. Adverse events were less frequent with tiotropium than with placebo — 56% of those receiving the 2.5-µg dose of tiotropium, 58% of those receiving the 5-µg dose, and 74% of those on placebo experienced adverse events, but no formal statistical comparison among groups was performed.

In contrast, a greater proportion of children reported asthma exacerbations as adverse events in the placebo group (29%) than in the tiotropium groups (14% and 6% for the 2.5-µg and 5-µg groups, respectively). 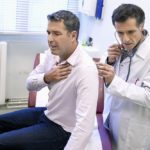 Case: A 55-Year-Old Man With Asthma Presents to the ED With Dyspnea at Rest