Adults with high blood eosinophil counts (BECs) may have a higher risk for incident asthma, according to a study published in Respiratory Medicine.

In this retrospective open cohort study, investigators identified adults aged ≥20 years who were free from asthma at the time of their first medical examination (N=57,975), using data from a Chinese multicenter longitudinal study collected between January 2004 and December 2015. The time point of asthma onset was established by self-reports of incident asthma and confirmed as the first incidence of physician-diagnosed asthma at follow-up.

High BEC was associated with an increased incident rate of asthma, with the risk growing as the BECs increased, starting at >110 cells/µL (P <.05). Poisson regression models were used to determine the relationship between BECs and incident asthma in multivariate analyses after adjusting for age, sex, body mass index, and asthma-like disease. The BEC cutoff point of ≥110 cells/µL was significantly associated with an approximately 62% increase in asthma incident rate (incidence rate ratio, IRR 1.62; 95% CI, 1.05-2.50; P =.028). Similar results were found using Cox proportional hazards models in which the relationship between BEC cutoff points and incident asthma was significant at 110 cells/µL (hazard ratio, 1.59; 95% CI, 1.01-2.51; P =.045).

This study was limited by its reliance on data from a retrospective open cohort study. Plus, there were no data using spirometry or other methods to evaluate pulmonary function. Smoking status evaluation was also lacking, which is likely an important covariate.

The findings of this study suggest that high BECs may predict incident asthma in adults and that blood eosinophils may be implicated in the disease pathogenesis. 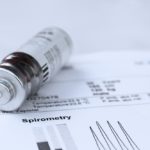