Although azithromycin does not affect the total bacterial load in the lower airways of patients with persistent uncontrolled asthma, use of the antibiotic is associated with a significant decrease in the total diversity of taxa, including a significant decline in the pathogenic species Haemophilus influenzae.

The current analysis from the 48-week, double-blind, randomized, placebo-controlled Asthma and Macrolides: The Azithromycin Efficacy and Safety (AMAZES; Australian New Zealand Clinical Trials Registry Identifier: ACTRN12609000197235) trial was conducted in Australia, with the results published in the American Journal of Respiratory and Critical Care Medicine.

The investigators sought to evaluate the effects of azithromycin on the airway microbiota, pathogen abundance, and carriage of antibiotic-resistance genes in patients with severe asthma. They performed 16S ribosomal RNA (rRNA) sequencing and quantitative polymerase chain reaction (qPCR) in order to assess the effect of azithromycin on sputum microbiology from participants in the AMAZES trial, in which oral azithromycin 500 mg or placebo was administered 3 times weekly to adults with persistent uncontrolled asthma.

The investigators concluded that the results of this analysis underscore the need for studies that evaluate the efficacy of nonantibiotic macrolides as a long-term treatment option in patients with uncontrolled persistent asthma. 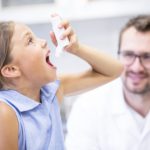