Rhinitis in childhood is associated with an increased risk for asthma in adulthood, according to a study published in Clinical & Experimental Allergy.

Researchers used the Tucson Children’s Respiratory study, a cohort of births that occurred between 1980 and1984, to obtain patient data for analysis (n=521). At 6 years of age, participants underwent an allergy skin prick test consisting of house dust mix, Bermuda grass, mesquite, olive, and mulberry tree; careless weed, and Alternaria alternata aeroallergens. Participants who had ≥1 positive allergy test were characterized by atopy. Questionnaires were used to identify a diagnosis of active asthma that occurred between ages 6 and 32 years as well as diagnosis of rhinitis that occurred at 6 years.

The researchers recognized defining the absence of atopy — essentially proving a negative — was a potential limitation of the study. In addition, unadjusted factors may have influenced the risk for asthma in this cohort.

“A plausible connection between non-atopic rhinitis and subsequent asthma could be a common susceptibility to respiratory viral infection as has been reported for asthma,” the researchers noted. “Whether young children with non-atopic rhinitis may also have alterations of immune responses to viruses is currently unknown, but it is tempting to speculate that in some children, such alterations could first be expressed as upper airway symptoms and subsequently as asthma.” 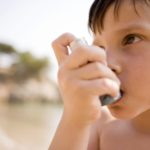