Asthma in the elderly represents a distinct phenotype associated with increased airway obstruction and mixed inflammation along with additional signs of systemic inflammation, according to a study conducted by Louis-Philippe Boulet, MD, FRCPC, from the Institut universitaire de cardiologie et de pneumologie de Québec-Université Laval, Canada, and colleagues, published in Chest.

Despite greater use of long-acting beta-adrenoceptor agonists and comparable use of inhaled corticosteroid therapy and similar adherence to asthma controller therapy, elderly patients with asthma also showed poorer asthma control than younger patients.

The results of the study also demonstrated marked airway obstruction in elderly individuals with asthma, which is likely the result of long-term changes in airway structure, including airway remodeling and loss of elastic recoil. Furthermore, a post hoc subanalysis that stratified elderly patients with asthma according to disease duration revealed a positive correlation between the degree of airway obstruction and the duration of asthma.

The finding of higher levels of sputum neutrophils and eosinophils among older patients with asthma compared with younger patients suggests inflammation evolves to a more mixed phenotype with increasing age.

The researchers concluded that the clinical implications of these results require greater study, but that greater knowledge in this area could lead to better targeting of interventions. 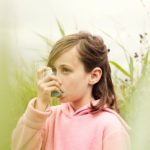 Consequences of Discontinuing Inhaled Corticosteroids in Children With Asthma