A total of 29 participants (20 female, 9 male) between 18 to 80 years of age (mean age 59±12 years) were included in the pilot study. Of those, 27 had thoracic x-ray computed tomography (CT) results available at baseline and after 28 days. All of the participants underwent MRI, spirometry, and oscillometry testing. In addition, patients’ eosinophil counts were measured and asthma control was determined via Asthma Control Questionnaire (AQL), Asthma Quality of Life Questionnaire (AQLQL), and St. George’s Respiratory Questionnaire assessments. These were completed on day 0 and again on day 28 following a single 30-mg subcutaneously (SC) administered dose of benralizumab. On day 0, CT mucus plugs were scored; MRI VDP was quantified on days 0 and 28.

Per univariate relationships for change in ACQ-6, multivariable models were produced, which demonstrated that day 0 VDP and day 0 CT mucus scores were significant variables for change in ACQ-6 on day 28 following treatment with a single dose of benralizumab 30 mg SC.

Limitations of this current study included its open-label design and its small sample size, composed primarily of women who were older.

The researchers said their study was the first to show that, among patients with poorly controlled asthma, XeMRI ventilation defects and CT mucus scores measured prior to treatment could help to explain the significantly improved asthma control reported following a single dose of benralizumab. The investigators further noted that their findings suggested that “the mechanism of action of benralizumab may involve the peripheral airways, even in patients with substantial mucus plugging.” 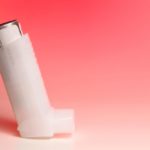