Polyunsaturated fatty acid (PUFA) dietary intake and plasma levels are inversely associated with asthma and/or recurrent wheeze and atopy at age 3 years, according to the results of a study published in the Journal of Allergy and Clinical Immunology in Practice.

Allergic sensitization at an early age has been associated with asthma later in life. Although genetic factors contribute to the development of asthma and atopy, diet may play a role as well. PUFAs such as omega-3 and omega-6 are believed to influence immune system function, but the results of observational analyses regarding this association have been inconclusive.

The analysis showed that total omega-3 and omega-6 plasma PUFA relative abundances were significantly inversely correlated with asthma/recurrent wheeze and allergic sensitization (P <.05). Dietary PUFA intake was also inversely correlated with asthma/recurrent wheeze (P <.05 for omega-6 PUFA only). These inverse associations for outcomes with dietary and plasma measures of total, omega-3, and omega-6 PUFAs were strongest for children who had both high umbilical cord blood 25-hydroxyvitamin D and high PUFA levels at age 3 years.

Given this last finding, the authors suggested that antenatal vitamin D could lessen the effect of childhood PUFAs on the risk for asthma and allergy. However, no association was noted for the concentration of 25-hydroxyvitamin D at age 3 on allergic outcomes. 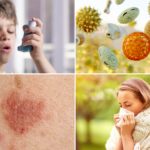 Relationship Between Atopic Disorders May Be Age Dependent