MicroRNAs (miRNAs) — specifically miR-125b-5p, miR-223-3p, and miR-26a-5p — are potential regulators of cellular function that may contribute to the pathogenesis of asthma, according to study findings published in the European Respiratory Journal.

MicroRNAs have the ability to regulate many cellular functions including inflammation, cell differentiation, and cell death. They therefore may provide novel targets for new therapeutic treatment strategies for asthma. In this study, researchers sought to identify the miRNAs involved in the pathogenesis of asthma. Toward that end, they performed small RNA sequencing with matched RNA sequencing in the same bronchial biopsies of 79 well-characterized asthma patients and 82 matched healthy individuals. The sequencing identified 78 differentially expressed miRNAs in the bronchial biopsies of asthma patients compared with controls, of which 60 remained differentially expressed after controlling for smoke and inhaled corticosteroid treatment.

The researchers identified several asthma-associated miRNAs, including miR-125b-5p and miR-223-3p, based on a significant association with multiple clinical and inflammatory asthma features and their negative correlation with genes associated with the presence of asthma. The most developed biological pathways affected by miR-125b-5p and miR-223-3p were inflammatory response and cilium assembly and organization. In addition, the researchers found that a lower expression of miR-26a-5p was associated with more severe eosinophilic inflammation as measured in blood, sputum, and bronchial biopsies.

“In conclusion, we have profiled miRNA expression in bronchial biopsies from asthma patients and controls and identified several candidate ‘asthma miRNAs,’ including miR-223-3p and miR-125b-5p, that were associated with multiple clinical and inflammatory asthma features and their negatively correlate genes are linked with the presence of asthma,” stated the authors. “Therefore, these miRNAs are important candidates for future studies to unravel their mechanistic role in the pathogenesis of asthma,” they added.

Disclosure: This research was supported by GlaxoSmithKline. Please see the original reference for a full list of disclosures. 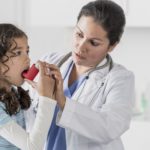 Does Nutrition Play a Role in Asthma?