Symptoms of anxiety in patients with chronic obstructive pulmonary disease (COPD) were common and significantly higher when identified by 3 screening questionnaires than the prevalence of anxiety as determined by the Diagnostic and Statistical Manual of Mental Disorders, 5th edition (DSM-V) criteria, according to study findings published in The Annals of the American Thoracic Society.

Researchers evaluated and compared test performance characteristics for the Generalized Anxiety Disorder (GAD-7), the Hospital Anxiety and Depression Scale—Anxiety subscale (HADS-A), and the Anxiety Inventory for Respiratory Disease (AIR) questionnaires and the DSM-V.

COPD is the third leading cause of death in the United States and a leading cause of disability, and individuals with COPD often suffer from comorbidities. The prevalence of anxiety in patients with COPD is estimated to be between 16% and 31%; however, because anxiety screening is not performed routinely, it may go undiagnosed and untreated. Anxiety constitutes a significant comorbidity in patients with COPD as it can lead to impaired quality of life, functional limitations, and poor outcomes. Determining an accurate method for diagnosing this comorbidity is therefore a priority.

Anna M. Baker, PhD, of the Division of Pulmonary and Critical Care Medicine at Johns Hopkins University School of Medicine in Baltimore, Maryland, and colleagues tested the performance characteristics of the GAD-7, HADS-A, and AIR in individuals with COPD recruited at 16 centers. These tests were evaluated and compared using the Mini International Neuropsychiatric Interview (MINI) version 7.0 as the gold standard.

Trained research coordinators administered the MINI interview and questionnaires at an in-person visit and then re-administered them by telephone 2 to 4 weeks later. The investigators computed a composite score for the presence of any DSM-V anxiety disorder based on the MINI and compared the results in individuals testing positive on self-report measures.

The investigators enrolled 220 individuals with COPD, and 219 completed the study. The investigators identified 11% of these patients as having a DSM-V anxiety disorder based on the results of the MINI. In contrast, the results of the 3 questionnaires found a 38% prevalence of elevated anxiety symptoms based on the AIR, 30% based on the GAD-7, and 20% based on the HADS-A questionnaires. Sensitivity was not significantly different between the 3 questionnaires, ranging from 63% for the HADS-A, 66% for the AIR, and 77% for the GAD-7, but the HADS-A had the highest specificity at 85%. This was significantly higher than the GAD-7 (77%; P <.001) and the AIR (65%, P <.001). GAD-7 specificity was also higher than the AIR (P <.001).

The researchers called for regular screening of patients with COPD using well-validated instruments for anxiety so that treatment can be initiated as early as possible. 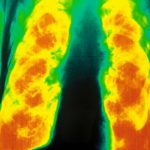 The Road to Precision Medicine in COPD Is Paved With Phenotypes