High levels of inflammatory markers such as C-reactive protein (CRP) and neutrophils as well as low eosinophil count, particularly in the absence of inflammation, predicted poor prognosis in chronic obstructive pulmonary disease (COPD), according to a study published in Clinical Respiratory Journal.

Using the National Health and Nutrition Examination Survey (NHANES), researchers analyzed data from 431 participants in the 2007 to 2010 NHANES surveys who had COPD and were followed for a median of 36 months. They performed Weibull survival analysis adjusted for covariates to calculate the risk for mortality associated with the biomarkers and used C-statistics to assess their added predictive value.

The authors noted that the addition of CRP with eosinophil and/or neutrophil counts to other risk factors, including age, gender, race/ethnicity, body mass index, smoking, poverty income ratio, asthma, diabetes, hypertension, and history of stroke or myocardial infarction significantly improved the predictive model for mortality.

There were a number of study limitations. Serum biomarkers were measured only once at baseline, and the stability of these biomarkers over time is unclear. The investigators were unable to determine other predictive measures of COPD mortality such as exercise tolerance, dyspnea, fat-free mass, and exacerbations as these factors were not included in the database. However, the sample cohort was selected from the general US population, contributing to the generalizability of the findings.

The authors concluded that the addition of high CRP and neutrophil levels and low eosinophil levels contributes significant value to current predictive models of COPD mortality. 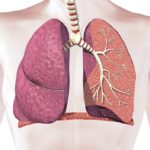