Although the presence of HIV infection was not independently associated with emphysema, the clinical effect of emphysema was greater in people living with HIV compared with individuals without HIV, according to the results of the prospective Copenhagen Comorbidity in HIV Infection (COCOMO; ClinicalTrials.gov Identifier: NCT02382822) study that were published in the European Respiratory Journal.

Lung emphysema was quantified by densitometry with the use of low attenuation area (%LAA) below −950 Hounsfield units (HU). %LAA-950, which is the proportion of lung voxels of low density below a threshold of −950 HU, increases with worsening emphysema. In this study, emphysema was defined primarily as %LAA-950 >10%, but a threshold of 5% was used as well. The 15th percentile density index (PD15) was also used to quantify emphysema, which was assessed with the use of semiquantitative visual scales.

No interaction was reported between HIV and cumulative smoking. Sputum production and breathlessness were observed more often in people living with HIV who had emphysema. Moreover, emphysema appeared to have a higher prevalence in individuals with HIV who had airflow limitations.

The investigators concluded that although HIV was not considered to be independently associated with emphysema, the clinical effect of emphysema was greater in people living with HIV than in people without HIV. 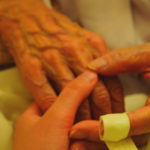 COPD End-of-Life Management Strategies: Use Could Be Expanded