Treatment with indacaterol/glycopyrronium (IND/GLY) has demonstrated greater efficacy compared with salmeterol/fluticasone (SFC) therapy in patients with chronic obstructive pulmonary disease (COPD) who are either former or current smokers. Researchers conducted a post hoc pooled analysis of data from the IGNITE trials, ILLUMINATE, LANTERN, and FLAME (ClinicalTrials.gov Identifiers: NCT01315249, NCT01709903, and NCT01782326, respectively), and the results were published in the journal ERJ Open Research.

Investigators assessed the differential efficacy of IND/GLY 110/50 µg once daily vs SFC 50/500 µg twice daily among current and former smokers with COPD. Further, the investigators evaluated pulmonary function based on improvement in pre-dose trough forced expiratory volume in 1 second (FEV1) and the percentage of patients who attained minimal clinically important difference (MCID) of 100 mL or more increase in trough FEV1 at week 26. Dyspnea was evaluated based on improvement in transition dyspnea index (TDI) focal score and percentage of patients who achieved an MCID of at least 1-point increase in the score at week 26.

Participants’ health status was evaluated based on improvement in the St. George’s Respiratory Questionnaire (SGRQ) total score and percentage of patients who attained an MCID of at least a 4-point decrease in the score at week 26. Change from baseline in use of rescue medication (ie, the number of puffs per day) over 26 weeks, as well as the annualized rate of all COPD exacerbations, was also assessed.

A total of 4617 participants were included in the study, of whom 1769 were current smokers and 2848 were ex-smokers. Of the 4617 patients in the pooled analysis, 522 were from the ILLUMINATE study, 741 from the LANTERN study, and 3354 from the FLAME study. Participant were all aged 60 years or older; the majority of the patients were men.

In both current and former smokers, improvements in SGRQ total score (P =.016 vs P =.045, respectively) and decrease in the use of rescue medication (P <.0001 vs P =.0271, respectively) were also greater in the IND/GLY group than in the SFC group. Treatment with IND/GLY reduced all mild, moderate, and severe COPD exacerbations, compared with SFC treatment, regardless of smoking status. In most instances, the differences in efficacy that favored IND/GLY over SFC were more prominent among current smokers compared with former smokers.

The researchers concluded the since the differences reported between the treatment groups were generally more pronounced among current smokers than among former smokers, this implies that smoking may decrease the effects of SFC therapy. The current analysis underscores the importance of selecting the most appropriate pharmacotherapy for those patients with COPD who continue to smoke. Smoking cessation remains key in the management of patients with COPD.

Disclosure: These clinical trials were funded by Novartis Pharma AG. Please see the original reference for a full list of authors’ disclosures. 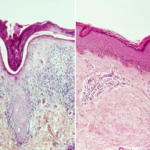 Asthma, COPD May Be Linked to Worse Patient-Reported Outcomes in SLE