Long-term ambient air pollutant exposure was significantly associated with increases in percent emphysema, according to a study published in the Journal of American Medical Association.

Researchers evaluated the relationship between long-term exposure to air pollutants and changes in lung images obtained via computed tomography (CT), lung function, and percent emphysema in a cohort of multi-ethnic adults living in US metropolitan areas enrolled in the Multi-Ethnic Study of Atherosclerosis (MESA) Air and Lung Studies. Percent emphysema was defined as the percent of lung pixels < -950 Hounsfield units. Full-lung and cardiac CT images used to calculate percent emphysema were performed at baseline and at follow-up. Spirometry and measurements of forced expiratory volume in 1 second (FEV₁) and forced vital capacity (FVC) were performed to assess lung function at baseline and at follow-up.

Study limitations study included the inability to assess microenvironments of air pollution, only using the lower two-thirds of lungs to measure percent emphysema, advancements in CT technologies during the course of the study, and the lack of volume correction completed on CT data. 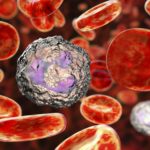 Is Neutrophil Elastase a Viable Biomarker for Bacterial Infection in COPD?