ICS/LABA Combined in One Inhaler vs LAMA Compared for Efficacy, Safety in COPD - Pulmonology Advisor

There was a lack of evidence to demonstrate that a once-daily inhaled corticosteroid (ICS)/long-acting beta2-agonist (LABA) was not superior or equivalent to inhaled long-acting muscarinic antagonists (LAMA) in adults with chronic obstructive pulmonary disease (COPD), according to a meta-analysis published in the Cochrane Database of Systematic Reviews.

A combination of a LABA or LAMA and ICS is recommended by the Global Initiative for Chronic Obstructive Lung Disease (GOLD) guidelines for patients with GOLD category C or category D disease. This review is the first to compare once daily ICS/LABA combined in 1 inhaler vs inhaled LAMA directly.

Researchers performed an electronic search of databases, including Specialised Register of the Cochrane Airways Group, ClinicalTrials.gov, and the World Health Organization International Clinical Trials Registry Platform. They included randomized controlled trials that compared the efficacy and safety of once-daily ICS/LABA combined in a single inhaler vs LAMA in adults with COPD.

The primary outcomes were all-cause mortality, any COPD exacerbation that required short-burst corticosteroid or antibiotic therapy or both, and pneumonia or other serious adverse events. Secondary outcomes included quality of life as measured by the St. George’s Respiratory Questionnaire or the Chronic Respiratory Disease Questionnaire, hospital admissions, exacerbations leading to intubation, disease-specific adverse events (other than pneumonia), physical activity measures such as the results of the 6-minute walk test, improvement in symptoms, use of rescue medications, and forced expiratory volume.

The investigators identified 2 studies with a total of 880 participants with COPD. The inhaled ICS/LABA was fluticasone and vilanterol 100/25 mcg once daily vs the LAMA, tiotropium 18 mcg. No consistent differences were found between the 2 types of inhalers included in this review. The researchers noted no statistically significant differences in mortality rates, rates of COPD exacerbations, lung inflammation, or serious adverse events. Similar improvements in quality of life, symptoms, and lung function tests were found in patients in both medication groups.

The quality of evidence was low for both studies and the confidence intervals were wide. Furthermore, the researchers stated that they were not able to assess publication bias using funnel plots because only 2 trials were identified and included in the analysis. The lack of data also precluded subgroup analyses. Furthermore, both trials were of short duration and focused on primary outcomes that were different from those in the review.

The authors argued that trials focusing on primary end points important in COPD and comparing fluticasone and vilanterol once daily and tiotropium would be valuable. 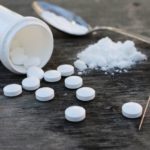