The authors concluded that oscillometry is a better monitor of airway obstruction outcome measures and the effect of long-term therapy in COPD than spirometry because it evaluates small airway obstruction, which is more relevant to the disease than large airway obstruction measured by spirometry. Furthermore, the results of the study showed that dual bronchodilator therapy improves airway caliber and decreases hyperinflation in patients with COPD. 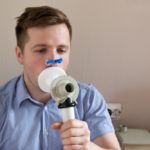