Researchers included patients with COPD (mean age, 63.3±10.4 years) who were prospectively recruited during exacerbation (n=62). A total of 33 out of 62 patients underwent a final visit at stable state after 18 months.

A higher rate of detection for Aspergillus section Fumigati was found during exacerbation vs stable state (16.9% vs 4.0%, respectively). Despite this finding, the frequency of patients who presented with anti-Aspergillus antibodies was comparable (32.2% and 33.3%, respectively).

The overall mean body mass index (BMI) in this study population was 25.2±0.8. According to the researchers, detection of Aspergillus section Fumigati was associated with a higher BMI during exacerbation (P =.01). Patients who tested positive for anti-Aspergillus antibodies, however, had a lower BMI (P =.03), lower forced expiratory volume in 1 second (P =.01), higher frequency of inhaled corticoids (P =.03), and higher total mold and Penicillium exposure (P <.05) at the final visit.

In addition, total mold counts higher than 30 colony-forming units (CFUs) per cm2 was associated with a higher frequency of patients who tested positive for anti-Aspergillus antibodies compared with 30 or less CFU/cm2 (71% vs 30%, respectively; P =.03).

A limitation of this study included its small sample size, which the investigators noted was partly caused by a high rate of refusals to conduct home evaluation with EDCs.

The researchers concluded that their findings support the consideration of indoor mold exposure in the management of patients with COPD, but additional “studies are needed to assess the clinical significance of anti-Aspergillus antibody kinetics and the potential role of mould exposure in the development of aspergillosis during COPD.” 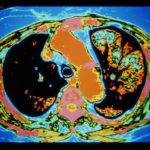