Inhibiting necroptosis, a type of inflammatory cell death, may be an effective new way to treat chronic obstructive pulmonary disease (COPD), a study in the American Journal of Respiratory and Critical Care Medicine suggests.

Apoptosis is a well-known, tightly controlled pathway to cell death that is triggered by quality control processes within the body. In contrast, necrosis is a type of cell death triggered by external variables and is less well controlled. Although necroptosis represents a regulated type of necrosis, it has been shown to increase the risk of inflammation in the body’s tissues.

In this study, a team of researchers from Australia and Belgium examined the role of necroptosis in patients with COPD and in healthy control group participants. The investigators measured total and active (phosphorylated) RIPK3 and MLKL in lung tissue samples taken from each participant. Lung samples were obtained from a biobank at a single university hospital.

The investigators also examined necroptosis-related mRNA and proteins as well as cell death in the lungs and pulmonary macrophages of mice who had COPD experimentally induced by cigarette smoke.

Higher levels of total MLKL protein in the epithelium and macrophages, as well as increased levels of pRIPK3 and pMLKL in lung tissue, were observed in samples from patients with severe COPD relative to never smokers and smoker non-COPD control group participants.

The investigators also reported increased levels of necroptosis-related mRNA and protein in the lungs and macrophages of mice with experimentally induced COPD. Deletion of Ripk3 or Mlkl prevented inflammation in the airways following exposure to cigarette smoke.

There was a reduction in airway inflammation, remodeling, and development of emphysematous pathology immediately following chronic exposure to cigarette smoke in mice deficient in Ripk3.

Both the deletion of Mlkl coupled with the combined inhibition of apoptosis with pan-caspase inhibitor qVD-OPh led to a reduction in chronic airway inflammation induced by cigarette smoke. Airway remodeling and emphysema was prevented by only Mlkl deletion.

The investigators found a reduction in cigarette smoke-induced lung cell death once they deleted either Ripk3 or Mlkl and used qVD-OPh.

The limitations of this study included the small sample size as well as the reliance on mouse models for some experiments. 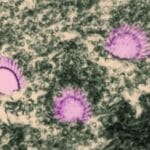