Measurement of interictal central respiratory chemosensitivity to CO2 is rapid and safe for  bedside use in patients with epilepsy, according to study results published in Epilepsia.

A total of 68 patients with epilepsy underwent HCVR testing (151±58 seconds) without serious adverse events. There was a range in HCVR slope of −0.94 to 5.39 L/min/mm Hg (median, 1.71 L/min/mm Hg). The HCVR slope was inversely associated with baseline ETCO2 and correlated with  the unpleasantness and intensity of dyspnea. The duration and magnitude of postictal tcCO2 rise after generalized convulsive seizures also inversely correlated with the HCVR slope. Overall, tolerability of HCVR measurement was high and rapidly performed in this population.

Limitations of the study included the lack of adjustment for sleep deprivation and caffeine intake and the inclusion of a small number of participants.

“The method described here can be used to assay CO2 chemosensitivity in a variety of clinical contexts and under different experimental conditions, including in an outpatient clinic setting,” the researchers wrote. “The results of these studies may aid in identifying biomarkers for patients at the highest risk of [sudden unexpected death in epilepsy] while providing new insights into the mechanisms responsible for peri-ictal respiratory depression.” 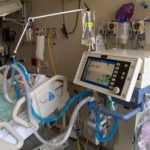