Among patients with septic shock who receive norepinephrine, the administration of selepressin compared with placebo was not associated with an improvement in vasopressor-free and ventilator-free days within 30 days of treatment, according to the results of a clinical trial published in the Journal of the American Medical Association.

Researchers conducted an adaptive phase 2B/3 randomized clinical trial (SEPSIS-ACT; ClinicalTrials.gov Identifier: NCT02508649) between July 2015 and August 2017 in 63 hospitals in Belgium, Denmark, France, The Netherlands, and the United States, with follow-up completed in May 2018.

Recognizing that the use of norepinephrine is not always effective among patients with septic shock, and is linked to certain catecholaminergic adverse effects, the investigators sought to evaluate whether the use of the noncatecholaminergic vasopressor selepressin improves outcomes among this population.

Of the 868 patients, 828 received the study drug and made up the primary analysis cohort. Among these individuals, 562 received 1 of the 3 dosing regimens of selepressin and 266 received placebo. The trial was terminated at the end of part 1 for futility. Overall, 98.7% (817 of 828) of the patients completed the trial. The mean patient age was 66.3 years; 41.2% of the patients were women. The study drug was administered for a median duration of 37.8 hours.

The investigators concluded that additional research is warranted to assess the potential role of selepressin relative to other patient-centered outcomes among those with septic shock.

Laterre P-F, Berry SM, Blemings A, et al; for the SEPSIS-ACT Investigators. Effect of selepressin vs placebo on ventilator- and vasopressor-free days in patients with septic shock: the SEPSIS-ACT randomized clinical trial. JAMA. 2019;322(15):1476-1485. 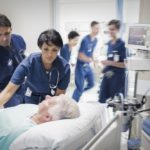 ICU Admissions May Be Preventable With Community-Based Interventions