Staphylococcus aureus and Pseudomonas aeruginosa skin cultures may help predict the pathogens involved in bloodstream infections in patients with epidermal necrolysis, according to study results published in the Journal of the American Academy of Dermatology.

A total of 98 patients who were referred in the acute phase of epidermal necrolysis involving a body surface area ≥10% between 2009 and 2017 were included in the study. All relevant bacteriologic and clinical data were collected, which included blood and skin culture results, number, severity, and time of bloodstream infection. Specificity, sensitivity, predictive values of skin cultures, and the effect of the bacterial inoculum were investigated.

Study limitations included a low number of bloodstream infections and the monocentric design.

Overall, the study authors concluded that, “Our results also highlight the importance of monitoring the skin colonization by repeated skin cultures to target the bacteria most probably involved in [bloodstream infection] and adapt antibiotics accordingly, even before the positivity of blood cultures.” 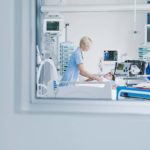 Majority of Patients With STEMI Treated in ICU