Although tidal breathing measurements of extremely premature infants differ from term infants, these measurements do not differentiate between premature infants with bronchopulmonary dysplasia (BPD) or those likely to develop respiratory disease within the first year of life vs those who do not, according to the findings of a study published in the Annals of the American Thoracic Society.

Premature birth confers a risk for impaired lung function that may continue into adulthood. Children born prematurely are more likely to have wheezing, cough, and hospitalization for respiratory illness. However, few data are available on the physiologic mechanisms involved in respiratory disease in this population.

Clement L. Ren, MD, MBA, of the Riley Children’s Hospital in Indianapolis, Indiana, and colleagues, analyzed data from the Prematurity and Respiratory Outcomes Program (PROP; ClinicalTrials.gov Identifier: NCT01435187) study, which is a longitudinal cohort study of infants born at less than 29 weeks gestation and who were followed for the first year of life. Respiratory inductance plethysmography was used to measure tidal breathing before and after inhaled albuterol 1 week before expected hospital discharge. All infants were breathing spontaneously and receiving up to 1 liter per minute (LPM) nasal cannula flow at 21% to 100% fraction of inspired oxygen.

The investigators administered a survey to caregivers at 3, 6, 9, and 12 months corrected age to determine the presence of respiratory disease. Tidal breathing measurements were compared in infants with and without BPD and with and without respiratory disease during the first year of life. Measurements were compared with a control cohort of term infants.

Tidal breathing was measured in 564 infants from the PROP study cohort. Different tidal breathing patterns were found at 37 weeks, postmenstrual age, in extremely low-gestational age infants than in full term infants. However, although preterm infants exhibited abnormal tidal breathing measurements, significant differences were not found to be associated with BPD or postdischarge respiratory disease.

The exclusion of infants receiving less than 1 LPM of flow, which may constitute a group with greater potential for postdischarge respiratory disease, was considered a study limitation. Furthermore, the inclusion of infants receiving at least 1 LPM may have been a factor in the failure to find an association between prebronchodilator tidal breathing results and BPD or postdischarge respiratory disease.

The researchers believe that the results of this study suggest that factors other than respiratory mechanics, such as respiratory viral infections, may be involved in the respiratory problems that often occur in extremely premature infants as they develop. 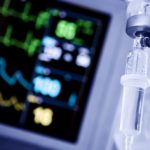