The American Academy of Pediatrics (AAP) is advising families to have their children vaccinated with inactivated influenza vaccine (IIV) rather than the intranasal spray in the upcoming 2018-19 flu season.

The advisory comes early as physicians are currently placing vaccine orders. A full formal AAP policy statement regarding the recommendation will be published in September.

In February 2018, the quadrivalent live attenuated influenza vaccine (LAIV4; intranasal spray) was added back as an option for the 2018-19 flu season by the Centers for Disease Control and Prevention (CDC)’s Advisory Committee on Immunization Practices (ACIP). Previously, the ACIP had recommended against the use of LAIV4 during the 2016-17 and 2017-18 flu seasons as the vaccine was found to be ineffective against H1N1 virus and less effective against the H3N2 virus.

The February decision by the ACIP was based on indirect study data from the manufacturer, which suggested that the new nasal formulation would provide greater efficacy. However, after reviewing the data, the AAP continues to recommend the injectable form of the vaccine over the nasal spray. “The data reviewed showed that receiving the nasal spray vaccine is better than not getting any vaccine at all,” said Flor Munoz, MD, FAAP, member of the AAP Committee on Infectious Diseases.

“If you get the nasal spray vaccine, just be aware that, depending on the performance of the new vaccine formulation, there might be a chance you will not be fully protected against H1N1 strains of flu. The efficacy of this new formulation has not yet been determined.”

The nasal spray vaccine can be given as a ‘last resort’, says the AAP, but it is not recommended for children ≤2 years old or children with chronic conditions such as asthma. “We really want to immunize as many children as we can against the flu with what we think will be the most effective vaccine. That’s why we’re recommending the flu shot,” said Henry H. Bernstein, DO, MHCM, FAAP, associated editor of the AAP Red Book Online. 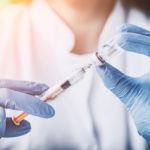 Flu Vaccines Have High Impact, Even With Relatively Low Efficacy