Observations of 2 hygiene protocols undertaken by hospital staff found that the “Masks Save Lives” campaign is highly effective in preventing nosocomial influenza infection in clinical settings, according to data presented at American Society of Microbiology (ASM) Microbe 2019 held from June 20-24, 2019 in San Francisco, California.

In 2018, the “Masks Save Lives” campaign was introduced in the study hospital and required that members of staff from wards with >2 patients with influenza wear a surgical mask for the entirety of their shift. Data on diagnosed influenza A/B, the rate of nosocomial infections, and mortality were collected and compared with data from the 2015 influenza season from the same facility. Standard hygienic protocols in line with official recommendations were used in 2015, when masks were only used in front patients.

Investigators concluded that the “Masks Save Lives” protocol was effective and that these observations highlight the role of hospital staff in the transmission of nosocomial influenza. This is important as it is not accounted for by official influenza management recommendations. 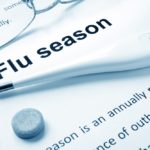