Results of a study evaluating the use of artificial intelligence for matching oncology patients with clinical trials showed a 58.4% increase in trial enrollment compared with traditional screening methods. The findings from this study were presented at the IASLC 2019 World Conference on Lung Cancer hosted by the International Association for the Study of Lung Cancer in Barcelona, Spain.

IBM Watson Health’s Clinical Trials Matching (CTM) is a system that is trained to abstract patient- and clinical trial-specific data from a variety of sources and harnesses machine learning to find clinical trials that are appropriate for a given patient.

In this study, CTM was trained and used to match patients at an academic oncology outpatient clinic to 1 or more of the approximately 42 available clinical trials in lung cancer. The matches generated by CTM were subsequently validated by clinical trial coordinators, and the validated matches were provided to oncologists prior to the patients’ clinic visits. Clinical trial enrollment for the periods covering 6 months prior to and 6 months following the introduction of CTM were compared.

Of the 2637 clinical trial matches made by CTM, 1818 (69%) were validated by clinical trial coordinators and sent to treating oncologists during the 6-month study period.

In their concluding remarks, the study authors stated that “use of IBM Watson Health’s Clinical Trials Matching (CTM) system with screening coordinators facilitated an increase in clinical trial enrollment and promoted awareness of clinical trial opportunities within the lung oncology practice.” 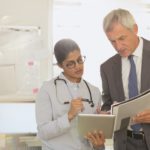