HealthDay News — For patients with early non-small cell lung cancer (NSCLC), mortality rates are higher after surgery vs stereotactic body radiotherapy (SBRT), and the difference increases as a function of age, according to a study published in the Journal of Clinical Oncology.

William A. Stokes, MD, from the University of Colorado School of Medicine in Aurora, and colleagues abstracted patients with cT1-T2a, N0, M0 non-small cell lung cancer who were diagnosed between 2004 to 2013 and undergoing either surgery or SBRT. The authors identified 76,623 patients who underwent surgery, and 8216 who underwent SBRT to calculate and compare 30- and 90-day post-treatment mortality rates between the two treatments.

“These representative mortality data may inform shared decision making among patients with early-stage non-small cell lung cancer who are eligible for both interventions,” the authors wrote. 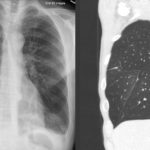