Microwave ablation (MWA) used endoluminally in patients with intrinsic tracheal and bronchial destruction has demonstrated both safety and efficacy in achieving airway recanalization. A pilot study was conducted among 8 patients in whom MWA via flexible bronchoscopy was used as a novel modality for the management of malignant central airway obstruction (CAO). Results of the analysis were published in the journal Respiration.

Recognizing that CAO is a debilitating complication of primary lung cancer and pulmonary metastases, which occurs in up to 30% of patients, the investigators conducted a pilot study to examine the field-based technology used in MWA.

MWA is known to heat tissue by creating an electromagnetic field around an ablation device. Between January 1, 2019, and June 30, 2020, pulmonologists at the University of Mississippi Medical Center, Jackson, Mississippi, used a flexible MWA probe in 8 adult patients who had endobronchial or endotracheal lesions that were obstructing 50% or more of their affected airway lumen. The procedures were carried out with the patients under general anesthesia while being intubated, ventilated, and oxygenated via a rigid bronchoscope or tracheoscope.

The researchers evaluated tumor size, prior ablative procedures, number of applications, time spent for the ablation, amount of energy that was delivered, rate of successful recanalization, patient complications, and 30-day follow-up.

The results of the study showed that successful recanalization was attained in all 8 patients. There were no complications reported. In 1 patient, tumor in-growth within a silicone stent was ablated, with no damage to the stent observed.

The use of this novel technique appears to aid in tumor destruction while maintaining an airway axis. The oven effect and air gap around a tumor permit safe, effective tissue devitalization and hemostasis without any thermal effect on the structures that surround the airway. In other words, as the tumor was centrally ablated, the borders of the tumor moved farther away from the surrounding structures, thus creating or increasing an air gap.

The investigators concluded that additional studies of endobronchial MWA are warranted to further characterize the proper dosimetry settings and to explore the duration and the number of applications needed to adequately ablate endoluminal airway tumors.

In future studies, said researchers, lesions should be treated with more than 75% airway obstruction and/or with the use of between 2 and 5 applications of 5 minutes duration with a target temperature of 80°C in places in which the airway axis is unclear. Between individual applications, the MWA probe should be repositioned to different areas of the tumor. Visual improvement in the airway axis due to tumor contraction should be used as the metric by which total ablation time is determined, rather than macroscopic thermal changes such as tissue charring. 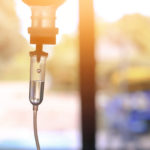 Ipilimumab Does Not Improve PFS, OS in Stage IV NSCLC