The Food and Drug Administration (FDA) has granted full approval to Keytruda (pembrolizumab; Merck) in combination with pemetrexed and platinum chemotherapy, as a first-line treatment for patients with metastatic, nonsquamous non-small cell lung cancer (NSqNSCLC) with no EGFR or ALK genomic tumor aberrations. This approval follows the fulfillment of a postmarketing commitment demonstrating the treatment’s clinical benefit.

The full approval for this indication was based on data from the KEYNOTE-189 study (NCT02578680), which enrolled 616 individuals with NSqNSCLC. Patients were randomized (2:1) to receive Keytruda or placebo in combination with pemetrexed, and either cisplatin or carboplatin every 3 weeks for 4 cycles followed by Keytruda or placebo and pemetrexed.

Results showed a statistically significant improvement in overall survival (OS) for those treated with Keytruda and chemotherapy (HR 0.49; 95% CI: 0.38, 0.64; P<.00001). The median OS was not reached at the time of the data cut-off in the Keytruda plus chemotherapy arm and was 11.3 months for those in the chemotherapy arm. 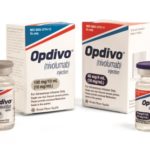