The incidence of lung cancer remains increased 5 years after smoking cessation in people with HIV, according to data published in Clinical Infectious Diseases.

The Data Collection on Adverse Events of Anti-HIV Drugs (D:A:D), a multinational cohort collaboration in the United States, Europe, and Australia, was used to identify 35,442 people with HIV, accounting for 309,803 person-years of follow-up.

Smoking status was defined as <1, 1 to 2, 2 to 3, 3 to 5, >5 years since stopping smoking, being a current smoker, and being a never smoker. The outcomes examined included any cancer, lung cancer, other smoking-related cancer excluding lung cancer and smoking-unrelated cancers. Patients were followed from January 1, 2004, until first cancer diagnosis, death, or February 1, 2016.

At baseline, 49% of participants were current smokers, 21% were former smokers, and 30% had never smoked. The highest incidence of any cancer occurred <1 year after smoking cessation compared with the incidence in never smokers (adjusted incidence rate ratio [aIRR],1.66; 95%CI, 1.37-2.02). This incidence was not significantly different from that of people who never smoked at 1 to 2 years after smokers quit.

The incidence of smoking-related cancers not including lung cancer was also elevated in the first year after smoking cessation (aIRR, 2.06; 95%CI, 1.42-2.99) and fell to similar levels as nonsmokers afterward.

The study benefited from the large heterogeneous study population provided by the D:A:D cohort. However, limitations existed. For example, smoking information is updated at the clinical visit; therefore, exact start and stop dates of smoking episodes, intensity, numbers of cigarettes smoked, and lifetime duration was not available. In addition, the smoking information may be underreported, as it is collected according to physician inquiry. Finally, this study had a comparatively short follow-up, a median of 10 years, relative to studies in the HIV-negative population where follow-up is typically 30 years or more.

The results show that “oncogenic potential for smoking is not reduced for lung cancer in the time frame that we have investigated” say investigators, and “this is in contrast with similar studies in HIV-negative people, which show a consistent decline in lung cancer incidence with increasing time since cessation.” It is therefore recommended that people who are HIV positive who quit smoking should still be monitored for lung cancer and deterring smoking and implementing smoking cessation efforts must be prioritized to reduce cancer risk. 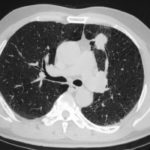