HealthDay News — Integration of plasma next-generation sequencing (NGS) into the routine management of metastatic non-small cell lung cancer (NSCLC) results in an increase in the detection of therapeutically targetable mutations, according to a study published online Oct. 11 in JAMA Oncology.

Charu Aggarwal, M.D., M.P.H., from the University of Pennsylvania Perelman School of Medicine in Philadelphia, and colleagues conducted a prospective cohort study involving 323 patients with metastatic NSCLC who had plasma testing ordered. A 73-gene commercial platform was used to perform plasma NGS.

The researchers found that therapeutically targetable mutations were detected in 35 percent of patients in EGFR, ALK, MET, BRCA1, ROS1, RET, ERBB2, or BRAF. Overall, 29.1 percent of patients had plasma testing only at the discretion of the treating physician or patient preference; 33 percent of these 94 patients had a therapeutically targetable mutation, averting the need for invasive biopsy. Among the remaining 229 patients who had concurrent plasma and tissue NGS or who were unable to have tissue NGS, a therapeutically targetable mutation was detected in tissue alone in 20.5 percent; the addition of plasma testing increased this percentage to 35.8 percent. Most (85.7 percent) of the 42 patients with a targeted therapy based on the plasma result achieved a complete or partial response or stable disease. 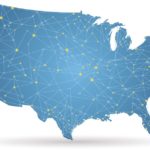 Lung Cancer Deaths 28% Lower in California Than Rest of US