Lung cancer incidence and mortality disproportionately affect women and racial/ethnic minority populations; however, screening guidelines are based on clinical trials of predominantly White men. To reflect current data, the USPSTF has revised the eligibility criteria, which may help to improve sex- and race/ethnicity-related disparities in lung cancer screening. Therefore, researchers sought to determine the changes associated with the revised USPSTF guideline for lung cancer screening eligibility among female, Black, and Hispanic populations by evaluating respondents to the Centers for Disease Control and Prevention’s Behavioral Risk Factor Surveillance System from January 1, 2017, to December 31, 2018 who were 50 to 80 years of age with a smoking history. Of 40,869 respondents, 21,265 (52.0%) were women, 3430 (8.4%) were Black, and 1226 (30.0%) were Hispanic.

“These findings suggest that female, Black, and Hispanic populations remain less likely to be eligible for lung cancer screening with the revised USPSTF guideline,” the authors wrote. “Eligibility criteria may need to be tailored for women and racial and ethnic minority populations to reduce inequities.” 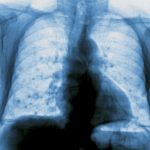